If you have been following my BLOG, you know that 2021 (besides the pandemic) my life turned upside down after a car accident that divinely revealed a case of Hairy Cell Leukemia (or as I call it, Harry Styles Leukemia - he's my favorite from 1D). I spent quite some time in doctor offices, cancer centers as well as physical therapy and chiropractic offices and a neurologist  or two.

We have all been or dozens and dozens of Zoom, Teams, and other virtual platforms. As we have become more adept and proficient on these platforms we have learned a "new" communication style.

Sitting in those Brady Bunch or Muppet Theater squares, on those different platforms, one of the things I noticed, is that we have increased our use of the thumbs up as an indicator that we can hear the speaker or in agreement with whatever was happening. 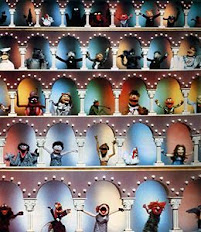 It is the historical significance of this and other items that have a negative beginning that intrigues me. It's like the term "drinking the kool-aid" that is used everywhere today as an indicator that someone has bought into whatever the hype may be. I heard someone at Disney World say "wow, that cast member has really drank the kool-aid." All in show for the fact that they were very much into their role/job.

Little do they know that the origins had such a dreadful and awful origin just back in 1978 during the "Jonestown mass-murder suicide." The term is used in so many connotations now, that most have little regard that it was meant for horrific examples. 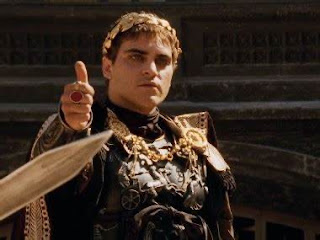 Caesar (the emperor, not the salad) pictured above in the guise of Joaquin Phoenix in the 2000 movie, Gladiator, directed by Ridley Scott uses the thumbs up as a show to save someone in the fights to the death that took place in the Coliseum in Rome.
The historical accuracy of this may or may not be linked to the 1872 painting "Pollice Verso" by Jean-Leon Gerome. There is some historical artifacts dating back to the first and second century that show a closed fist around a thumb indicating to save a gladiator. 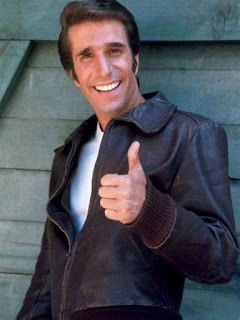 More recently (1974 actually) Henry Winkler (seen above) portrayed Arthur "Fonzie" Fonzarelli in the show Happy Days. Fonzie's cooler than cool late 1950's greaser became the run-a -star with his trademark saying "Sit on It" and the thumbs up to show his approval when other characters did the right thing.
In our fascinating modern world, the "thumbs up" has context in every social media category. Apple, Google, Samsung, Microsoft, WhatsApp, Twitter, Facebook, Zoom, and so many other versions of the thumb and even have developed an encyclopedia of emojis. (Emojipedia)
I have found myself on those Zoom and Teams calls where someone asks, "can you hear me okay?" Or "Is my slide deck showing?" And folks in the various Brady squares either indicate agreement with the zoom Thumb emoji or just by raising their thumb (s) in view of the camera. I am not sure how I feel about all of it in a world where more and more folks seem to be split on having face to face conversations, interactions, and worse so, discussions that seem to divide so many.
I am grateful for my experiences at Camp and while we were in Florida (2004-2009) we worked with the three Deaf schools in to provide a week of summer camp for deaf, hearing impaired, siblings of deaf youth, and CODA. Sign language is amazing and as the camp director, the deaf staff assigned two hearing interpreters to me whenever I had anything to say to the campers. It felt like I was in the United Nations. The deaf director told me it was because when I spoke, I was exhausting to the interpreters.
Signs and signing are a part of our lives. And have become even more so during the past few years.
At the onset of the pandemic, back in the Spring of 2020, Zoom and teams became a lifeline to so many. There were dozens of calls and that summer, my camp experiences went digital with "Camp In A Box" platform helping hundreds of Scouts across three states complete camp and merit badge activities via Zoom.
Again, I find it odd that something that began with such a negative connotation as life or death in an arena has become part of a lifeline to so many.
As I mentioned at the beginning of this story, my doctor visits have become numerous and I find myself at physical therapy a few times a week. One of my great pleasures became a traction device (and yes, I have a home version now as well) for my neck. The therapist would set me up for 15 minute sessions and often check back to see how I have been doing. My indicator to them...yes, you may have already guessed...a thumbs up.
Post Script:
Let me know your thoughts on the "thumbs up" and the impact of living digitally has had in your life. Share a comment and let me know that you too have drunk the kool-aid.
at April 06, 2022