(Fifty Nifty Years in the United States Series)
It was a fateful lunch just a few months into my tenure as the Camp Director for a YMCA camp in Florida. The CEO who had hired me had an unexpected turn of events and was gone. Peggy, who had started about 5 months prior to my arrival was being appointed the interim CEO (and eventually became the CEO) had asked me to lunch to “talk.”

Circumstances were not optimal at all. She knew I had moved my family from California and that the situation was not what I had signed on for.

I recalled a story about how in parishes when a new Pastor was appointed, the entire staff would offer their resignation. (The point being that the pastor would have the option to decide who they wanted and thus helped create their own team.) As I shared the story, Peggy stopped me and said, “I don’t want to do this without you.” It was a frank discussion and one that set the tone for our relationship for nearly five years with that organization.

“We feed things.” This is one of my favorite Peggy terms. The story behind this is that we inherited several back invoices from the previous administration. One was for a local feed supplier for the horses that we owned. (A beautiful barn and somewhere between 7 and 15 horse year round for lessons and trail rides and eventually a drill team led by another amazing person who just happened to knock on my door one day.) They had a back pasture to feed, but they also had grain to supplement the sandy terrain that is Florida (essentially one big sandbar).

We also had two other vendors where those that supplied food for the dining hall for the summer season. This was not as easy because we owed well over five figures to these two vendors and we needed to get food supplies for that current summer. I met with one of the vendors and the other basically wanted nothing to do with us.

We arranged a pay schedule that would keep us current with any new purchases and basically made a $500 to $2000 payment along with those new invoices to pay off the past. Peggy made this equitable arrangement and then did something even more amazing. She kept her word. I am not implying that others had not. I have worked with several non-profit senior staff that liked to tell others what they thought they wanted to hear. In fact, that was the case with most of the past leadership I had worked with. (With the exception of the folks I have previously mentioned in past post from my Blog and specifically Fifty Nifty series)

Peggy approached everything with a certain resolve. She utilized everything and everyone around her. She would often cite the movie Apollo 13 (and you all know what a fan I am – ‘She had me at Apollo’) and the scene where the engineers at the Johnson Space Center would throw a bag of items on a table to determine everything that the astronauts had in their damaged lunar capsule. The result was that they figured out a way with limited options to make sure that those astronauts where able to keep breathing – no pressure. 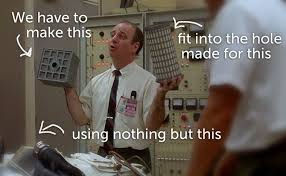 Peggy took this and the ability to work in difficult and critical conditions and those were our great lessons.

Peggy was also a quilter. Someone who liked to make quilts. It wasn't until a while after our time together that I started to connect her passion for quilting with leadership. I had hear the term "leaders and enders" in reference t o quilting and had no idea what that was.

You may have heard quilter’s talk about using leaders and enders. I had heard these terms many times and didn’t have a clue what they were talking about until I went to a trunk show last fall and was enlightened as to what they were. In the picture above you can see the different fabric at the start and finish of the chain – the leader and ender.

A quilter shared with me that "Leaders and enders are a great way to help ensure the ¼″ seam is accurate at the start and finish of piecing as well as eliminate some of those other issues we sometimes have. The best part is that you can create another quilt at the same time or at least get started on one."

These preventative or leading measures are how Peggy looked at leadership as well. Preventing issues that form as a result of early decisions; saving by eliminating what needs to be cut off; consistency; forcing you to clip what is not needed; pieces together additional items; and making things more efficient.

I have worked at camp and many of you know the 24/7 or as I call it 25/8 cycle of a summer season. Imagine that going on for nearly two years straight. And in the middle of all that Hurricane Katrina happens and Peggy decides to pack up half the staff and go help run a shelter for hurricane victims. This lesson that when you think you have troubles and strife; to be able to seek out those in worse conditions and say, stop what you’re doing, and we are going to help those in true need. That single action was one of the greatest lessons I gained from Peggy.

I am so grateful for those five years and those constant new challenges. It has given me a great appreciation to know that miracles happen every day. I learned that and so much more from Peggy as I have spent these past 50 plus years in these United States.

P.S. A link for actual quilting with leaders and enders.