I had the pleasure of working for Ken Stein from February 1998 to end of 2003 - primarily as the Camp Director for YMCA Camp Edwards. I also served for nearly two years as an operations person for an aquatics branch, three day camps, 63 after school sites, and a rural Y center that operated in schools and fields as well as and helping open a large community center (built in collaboration with a local municipality). It was one of the most complex times of learning as a leader and set me up for future success on the lessons learned (cue Sabre Dance music as a theme).

At the time I obtained the position in 1998, I had just left another YMCA Camp and I recall my conversation with Ken. He indicated this may not be where I wanted to be ultimately, but he had a need for a camp director right now and I was available. I felt wanted and needed and agreed to come and work for Ken Stein.

As a younger version of my current self, I thought I knew a great deal about camp (the older I get, the less I know). But the lessons and opportunities that emerged over that almost 6 year period were tremendous.

With well over 150 hours of mini-Druckeresque (Peter Drucker link) lunch meetings; this was his way to coach and direct as I worked to learn more about being a leader and transforming a culture. I am so grateful for the amount of time and investment that Ken provided. It was like a mini course of non-profit management right down to the values and culture an organization must have to move forward.

Ken let me stretch and grow and even fail. He provided leadership and knowledge and a kick in the right direction when needed. I learned about the Y, our mission, camping and the financial and budget considerations of “innies and outies” (a term Ken used as well as Howard Pease at a previous YMCA) as well as a hundred other things. I recall that while serving as a branch director one of the things he asked me to do was always go throw the front doors as if I was a member. I had been using a side door entrance close to where I was parking and he wanted me to have the same view that participants would have and an appreciation for what they would see. It was also a way to have access to members who might be walking through at the same time. Creating opportunities to interact with customers. Simple, profound, and essential.

In my years of work at the Y, I had worked for at least 13 different CEOs and I have to say that I learned the greatest amount of what it is to be a true leader in my time with Ken Stein.

To this day, when faced with a choice or difficult situation - I often think about what would Ken Stein do? Peter Drucker stated, “Success in the knowledge economy comes to those who know themselves - their strengths, their values, and how they best perform.” Ken Stein clearly taught me this concept. He was clear about what he knew and he wanted to help me be clear as well. 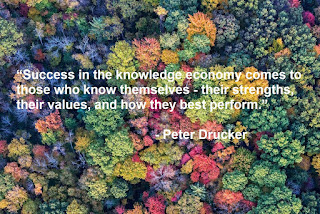 For this I am extremely grateful as I have spent these last 50 plus years in these United States.