1980 - Thank a Teacher for A Pile of Leadership Lessons

(Fifty Nifty Years in United States Series)
I suppose why you are looking at a picture of manure and the headline is "Thank a Teacher." Buy now you will note that I have had a couple of teachers on my BLOG and a few more will show up later.

Mr. Shaw, was my high school drama teacher; one of my first "bosses" when I started working at the San Gabriel Civic Auditorium (Southern California); and director in the few shows were he choose to spot light your truly in a game he liked to play called "find the house manager in the show."

My first show with him was a version of "Heaven Can Wait" (Here Comes Mr. Jordan) and I played a worker delivering equipment to the home of the protagonist. Bill said something to me and I immediately decided that this guy was a worker from New Jersey trying to support his family. He stooped a bit from carrying things and had a thick Jersey accent. Bill said, "make him feel real."

I learned and gained so much from Bill. (I still struggle to call him that). My reason for writing this is that I am celebrating 50 year living in the United States later this year and have challenged myself to write a thanks to different people who came into my life for each year.

I can think of at least seven different times where I went to Mr. Shaw and asked for help/support and an opportunity and he always said yes or provided the space for me to take that opportunity. More often than not, I failed at what ever I was trying. I wanted to be a stage manager because I looked up to those who had that role and Bill gave me an opportunity and than saved me as I learned that was not my fit.

As I moved through college, I made a choice early on not to pursue some poor decisions on how to make money. Bill graciously carved out some work for me at the theater where I had to really work hard to even come close to other money earning potential.

My co-worker at the theater and myself wanted to have a say in who we supervised and demanded that we were allowed to screen and hire new staff members. For whatever reason, he gave us an opportunity and we failed forward in that endeavor. I have conducted well over 5000 interviews since then and I am grateful for the early lesson and opportunity to learn how to ask questions and figure out who would fit in that role we cast as a theater usher.

Had it not been for Bill, I would not have met Lee Anne (we married nearly 7 years later) who he hired after promising not to hire people anymore as a favor or because they were a warm body on the schedule. I purposefully left her off the usher schedule for two months after that and finally gave in when he pressed me to do so. (There is a bit more to that story).

I gained a sense of value and self worth because he always wanted to help and support what I was doing. I had many conversations with Bill and I always gained some lesson from them. He was always looking at me intently as we talked and later on I came to believe he was always casting people in roles. In fact in one of my last encounters with Bill more than a decade ago. We were chatting in his office at the theater and he said, "you know you would make a good Samwise Gangee."

When the theater became the home to the Music Theater of Southern California, I had his full confidence to run the front end of the theater in the role of House Manager. I know it was a title he graciously let me co-opt and I was proud of the service our team provided in making things run smoothly for the patrons of that theater.

Perhaps the best lesson came from one story that I know he shared with so many. It was a simple story of two kids; one was an optimist and the other a pessimist. Their father tried to teach them both a lesson. There's more about ponies and what they produce.

I will leave the simple concept and moral of the story here. I thank Bill for the wonderful lesson and the value he helped me to see in myself as I have shoveled my way through these many years. I am forever always, “looking for the pony.” 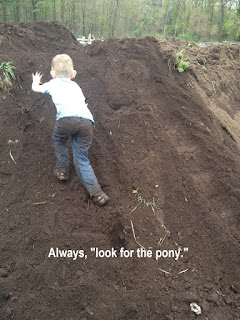 Post Script - John Maxwell's leadership "Law of Solid Ground" is about building trust and how that requires competence, connection, and character. As I look back on this teacher, he was always about the business of allowing me to grow with that gift of building my own competence, connection, and character.
January 8, 2021 - I had just posted this 4 days ago and heard of Bill's passing today. I take his words to heart even more so as I look for the pony in all of this. Prayers for Bill, his family and friends and the thousands of students who have been blessed by his work.
at January 04, 2021