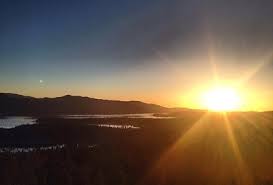 And, for many of those, I was often there on Monday morning watching the sunrise at the top of nearby Castle Rock over looking Big Bear Lake. It marked the start of summer; summers that for nearly 40 years have been spent in service of others in variations of the camp experience.

I am certain that I had ridden up with George Finnerty and I spent that early morning in 1983 hiking out to Castle Rock imagining what my summer might be like. I know we, members of the Temple City YMCA staff, at camp later that summer. George wanted to get an early start home that day, but I was earlier. The hike is just over a mile each way and I wanted to time it just right. I got up extra early and the hike out was entirely in the dark.

We did not have smart phones to tell us the exact time of sunrise and I wanted to be on top of Castle Rock for the right moment. (I did not have a camera either; I borrowed this picture.) By the time I got to the top of the rock, there were a couple of others there as well.

As I write this, I recall how each of us just sat or stood in silence watching the sunrise. My thoughts were of so many memories that had yet to happen. I imagined my summer with friends at the summer day camp and singing songs (Hey Jude at the water park) Big Tony’s early morning musings, and matching pajamas with Bill and the Mushinskie brothers at Bluff Lake in early August.

I did not know that those moments of memory were foundational to not only my summer; it was foundational to life. It wasn’t until we all climbed down and the others headed towards the trail down to Big Bear and I went towards camp that someone said the only words, “have a great day.”

I learned from an early mentor, Brian Crater that “camp is all about beginnings and endings.” This became a way for me to begin my summer. It was an early thinking and that has led to future mentors, Wally Wirick, Richard Bach, John Maxwell, and Paul Martenelli (to name a few) who have helped me to choose my response for my future.

Leadership lessons from my camp journey have been numerous. This one is one that has be one that I know is like a law of nature. You can count on it. Life is all about beginnings and endings.

Thanks to all on this journey and have a safe Memorial Day.

Another summer begins, another lesson shared.