People at camp do things that perhaps they do not do anywhere else in the world. Amy Larson is one of those people. There is not a task at camp that was beneath her. She would do or say anything that needed to be done in order to advance the cause of children having a great time at camp.

Again, people at camp do things that perhaps they would not do anywhere else in the world. Amy was another one of those fixtures who had been at one of the camp's I directed in California.

Amy's family had also been Y folks and her grandfather was a legend at the Y in their community. Her enthusiasm was marked by a long labored want to share about her ideas and philosophy of camp. After an extremely lengthy amount of coaxing and intense relationship building (17 minutes) she exploded with what I found to be a leader waiting to happen. I joke about this because those who know Amy, know that it does not take a great deal to illicit her reactions, opinions or exuberance. It was absolutely what I was looking for in helping me shape camp.

Our couple of summers together and her help and support during the off seasons and winter programs where a truly special time. Amy’s gift to me was that she allowed me to help her through decisions and growth and great life choices.

I felt like what I thought it might be like for some of my mentors might have felt. A satisfaction of seeing someone discover their life’s potential. In service to youth. It was what I can only describe at the time as feeling significant in another person’s life. I am not sure I had shared that with Amy and it wasn’t until my role changed in 2001 that I missed her gift.

John Maxwell says, “Once you taste significance, success will never satisfy you.” 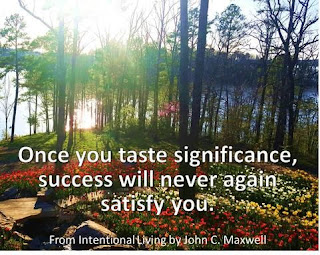 Amy will never know (unless she reads this) how much she enabled my desire to make significant changes that allowed us to serve an entire population of children that we had never served before.

A the beginning of our time, that YMCA had three week long sessions of camp each summer. Inside of three years, we went to six weeks; and then to 9 weeks; and then adding on bed/bunk space, program areas, building a cabin, and even engaging another nearby camp for bunk space. We also added travel programs and surfing (beach) camp sessions.

At the time a significant leap in how and who we served. From a YMCA that primarily served youth from predominantly affluent neighborhoods; to the expansion county wide and serving a greater number of disadvantaged youth as well as youth in the foster care system.

I am so grateful for my time in these United States and for Amy who allowed me to help her find in herself what I knew was a great leader.

Today, Amy is a teacher and a mother, and I am still inspired by her exuberance to share the world with her own children and the hundreds and hundreds that we served together.

My view at camp in Upstate Western New York 1. Praise the effort not the outcome “ I really like the way…(insert behavior you observed the...