Father Thomas McGovern – He was the first priest that I knew as an example of leadership. He was appointed Monsignor around this time and I recall how big a deal that was in the parish. He was also the priest who taught us how to be altar boys (as it was know at that time). The previous year, upon completion of our first communion, we were (most of the boys in my class at Holy Family) all conscripted to become Altar Boys (that’s what they called altar servers back then).

My first time as on the schedule and I got up very early so as to arrive early. No one was there but a handful of people in the church. I got the altar garments on and proceeded to set things up. I got ready to light the candles, which was one of the reasons I had arrived early and had very much wanted to be the one to do so. I lit the flame extender and in doing so I extended the wick on the lighter out a bit too far. As I reached to get the first candle lit on the altar, the wick burnt completely off and landed in the flower arrangement. I looked out at the church and back at the flowers to make sure no one had noticed. As I looked, the traces of smoke began to rise from the slightly dry flower vase.

I did the only thing I knew to do. I panicked a bit. In doing so, I ran back to the sacristy and found water…Holy Water. I ran back out and noticed more smoke and in my 9 year old brain…there may have been flames as well.

By now, the other Altar boy (my friend John) had arrived. He helped to get the candles lit and everything else prepared. Father McGovern would not know anything had happened.

During the service, the altar boys sat on these small backless seats that were right next to the priest. They were directly in front of a wooden outcropping on the altar itself. At one point, John went to sit down and I could see that he slammed his back on the lower part of the outcropping. A muffled “hmph” that was audible enough for Father McGovern to turn around and raise an eyebrow.

As with any good friend, I did what I knew to do. Attempt to control my laughter and do so very poorly. I could see tears of pain on John’s face and that made it worse. Father McGovern cleared his throat and again we attempted to maintain composure.

During communion at this time, Altar Boys had a “Communion Paten” to hold under the chin of those receiving Communion. I, of course stood next to Father McGovern and extended the “paten’ with each “Body of Christ.” It was a fascinating thing to see so many faces and tongues. There were not many that accepted the communion wafer at that time in their hand. The whole idea was to catch the communion wafer or bits of it should it fall from the recipients mouth.

This was an early morning mass and I had been up for two hours already in the excitement of the being an altar server. By the time communion rolled around, the excitement had worn a bit and monotonous drone of the endless communion line took a toll. I was standing on the step above the participants with Father. My eyes felt very heavy and I just kept raising the paten towards each person. There was something hypnotic in all those tongues. I know thinking back on this, that it was not a long time. But the next thing I knew, Father McGovern was trying to balance the Communion Cup and the paten and me as I almost fell forward in a sleepy state towards one of the parishioners. I received a look of astonishment and admonition. At this point, I was convinced that I would never serve again. 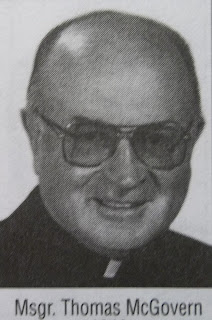 At the end of the mass service, we would go back into the sacristy and kneel as father would give us a blessing. This is where he would put a hand on each of our shoulders and pray for a moment. In doing so, I can say that Father McGovern was part Vulcan and administered an equivalent Vulcan neck/shoulder pinch as he pushed down. At the end of the “blessing” he uttered in his Irish brogue, “Let’s do better next time.”

I think about this nearly everyday. When I go to bed at night and then when I get up the next day. I have used these words in self reflection so many times. I try and be a better husband, father, director, leader, servant or otherwise given any opportunity.

I am grateful for so many early lessons in the 50 plus years since my family moved to these United States. And I am grateful for the opportunities that no matter how things may go wrong, you have the freedom and opportunity to do better next time.