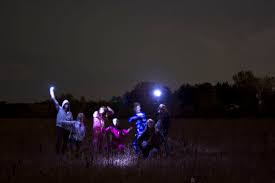 Albert Schweitzer said, “At times our own light goes out and is rekindled by a spark from another person. Each of us has cause to think with deep gratitude of those who have lighted the flame within us.”

Children love camp and one of the best parts of the camp experience is campfire. It’s that rock star moment for a child to be up on stage and share their skill, talent or otherwise, with their cabin group and cohorts. When I arrived at my new camp in 2009, campfire was a rich part of that experience. I also knew that I would be able to share some new traditions with that camp and further their well established culture.

Having a campfire usually involves campers bringing their flash lights to make sure they know their way back to cabins (led by the leaders). Part of the culture at that camp, was that campfire was often a bit out of control and hard to reign in the energy. I have been a big believer that you can harness the energy for your cause and regain control.

I learned early on that flashlights during campfire meant that often lights would fly all over and into the faces of performers (those on stage) and lead to lack of attention/respect for those who were indeed having their rock star moment (s).

Upon arrival at campfire (the first night of camp), I would pick out a volunteer (asking them if they would help me with a demonstration and being on stage for a few minutes.

When everyone had arrived, I would invite my volunteer up. At that point I would announce that we were about to have a demonstration of star wars and light sabers. I would ask everyone with a flashlight to turn them on and wave them in the air. Then I would ask them to flash them at my volunteer. I would then ask them to point them all to a tree or bush on the left. Then tell them to pint them back at the volunteer. Then point them at a rock in the distance. And back to the volunteer. I would yell form left to volunteer to right and back. In a grand crescendo of lights pointing everywhere and all directions; I asked that everyone practicing their best light saber move. I would count to three and say to point back at my volunteer and then turn all lights off.

In a smaller voice, I would then politely ask that all lights stay off until otherwise directed. If anyone turned a light on, I would walk over and ask them to hand it over until the end of campfire. Usually within an example or two of that message, no lights would come back on.

There are multiple messages in this light show. 1) Often times, my volunteer was someone that had been pre-selected by a staff member as someone who needed a moment to shine. 2) The light show and subsequent rule about turning a light back on set the standard for why we follow the rules in camp.

3) I firmly believe that everything that happens in camp (some 973 things a day) is and should be intentional. The best pranks are played in that none of the campers know that their spontaneous prank was planned days and sometimes weeks in advance of their arrival. 4) In my time at camp, I have often argued vehemently with staff who want to change a horse in mid-stream that I have found upsets more than it promotes. 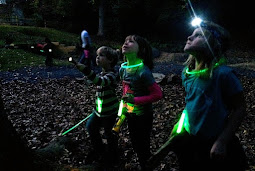 One of the most amazing things to watch is a group of 8-year-olds walking back to their cabin after campfire. They all have their flashlights and seldom does one of them shine that light on the path in front of them. Inevitably somewhere in the darkness one will hear a “thud” or more and I often picture a domino effect of campers tripping over the one that fell first.

5) For the last few two decades or so, I have tried to convey this as a metaphor for our staff and leaders. “Campers shine their light everywhere.” It is part of the energy and enthusiasm of camp. That spirit lingers on site well into the fall when all the campers and staff are gone. (More about that later.)

The metaphor is about where you want to put your energy, your light. I find it fascinating that some leaders spend all their time focusing on what is wrong and what needs to be corrected. Your energy (light) flows to what you measure. If you are all about catching folks in what may be wrong, that’s what you will see.

6) Like the Schweitzer quote above, we provide a light for one another when we focus on what we value in each other. I believe like my mentor, John Maxwell, that I am everyone’s biggest fan. I believe that they are here to do a great work and find the best in each of them. Finding and holding on to the best in others, even when you and they may be struggling is one of the greatest lessons learned in all my camping experience.

“Where do you want your light to shine?”