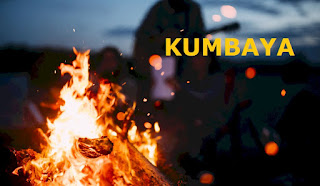 I have heard a great version of the Kumbaya song/story on two different occasions. The first was from a great guy named “Cookie” (I do not recall his real name). He was from the Verdugo Hills, California area and we were sharing a bus going from VH to Pasadena and then on to camp (about a four-hour ride in all).

Cookie was one of those tall, long legged, tan outdoorsy people with a beard. He always had a smile on his face, and he seemed to have his guitar with him when he needed it. He would be doing an activity and interacting with campers and it just showed up. His guitar would be in his hands and I would always think, “Was that there a minute ago?”

It was the summer I turned 18. Cookie must have been at least a decade older just from how he carried himself and his demeanor.

Our responsibilities that week were to chaperone the campers from our respective region (Verdugo Hills and Pasadena, respectively) and make sure that they incorporated everyone into the general camp population with the Orange YMCA (the primary lead group for the teen session).

We shared a room at the lodge and I never recall seeing him there other than late at night or as he was walking out the door in the morning fully prepped for the day with his guitar on his back.

Cookie and I had some great talks in passing moments throughout the session and late at night. It was after twilight on Wednesday of that week he said, “Let’s go to the tent cabins” (a grouping of three cabins near the archery range where they shared a small campfire space in between the buildings. We both had campers that had been intermingled into those cabins and they had invited several of the older girl’s cabin group for a late evening fire.

It was very social to begin with and Cookie and two of the other leaders with guitars began leading songs.  I was standing near the edge of one of the cabins and he wandered over to ask if I knew the song “Kumbaya?” He had a gleam in his face and I think he winked as he asked me about the song. I had answered yes, and he nodded towards the fire as if to say, stand with me. And, I did.

As he was strumming, he began telling a story about his life and background. It was past that gloaming part of the evening. Cookie seemed to have everyone’s attention and respectful silence without having to do anything then stand, strum, and share.

Earlier that day, two of my campers from the Pasadena area had been struggling with homesickness and had been feeling like they were not part of their cabin groups. The conflict erupted as a result of a simple lack of respect for one another and a classic us versus them attitude that is ingrained in every culture.

I had intervened at the request of the overall Camp Director. I shared with them my own attempts to be part of the staff team even though I was not from their area. My empathy skills were still a long way in developing, and I thought sharing my own struggle would be a way to bond and overcome the conflict.

I had also shared with them to find someone that they admired and would want to be like, and I used Cookie as an example. That evening they were smiling, talking to other campers, and nodding their comfort level to me as I followed Cookie up onto the dirt center stage.

Cookie’s story meandered about his background and he got to a point where he shared about his not too distant ancestors who were coal miners. He spoke of the factory towns. He spoke of how they were a lot like camp. Everyone supported one another in good times and bad. There was a deep connection.

His story turned as he talked about the times when a mine collapses. The siren would blare, and everyone would run to the mine to help or wait for word from below. His guitar strumming took a turn into the cords of what I recognized immediately as “Kumbaya,” having had his earlier cue.

It was magical and it captured the evening at the end of the day of strife and homesickness as well an air of reconciliation.

“Someone was crying” went the lyrics and then they were “Praying,” followed by “laughing” and ultimately the interpretative “Come by here.”

By this time, there seemed to be camaraderie in the air and my conflicted campers where all side by side hugging and swaying.

It seemed to my youthful eyes and senses; that at the end of that day, holding hands, and singing Kumbaya was a great lesson.