1994 - Leadership and Learning Service From My Son

He was first so he is first. I remember the day Lee Anne called and I was at work. She said that she couldn't wait to tell me that we were having a baby. I said, "Thank you, I have to go back to work now."

I immediately got off the phone with her and called my friend and mentor, Wally. I stuttered through telling him what just happened. He was joyful and exuberant and I felt I should be the same way. If fear is a great motivator, consider me motivated.

In an earlier BLOG (Great Customer Service and My First Child) I had written about Bob Telleen and how he called on the day after Alec was born to congratulate and challenge my leadership at the same time.

Alec was due on September 30 and arrived nearly three weeks later. After going to the hospital and 37 hours of labor (more ice chips – that was my role) after being induced, Alec made us wait. Alec has been and continues to be a huge motivator in my life.

I have fond memories of carrying him for two summers in a back pack at camp. We (and by we, I mean me carrying him)  hiked all over camp and he would take naps. It amazes me how (to this day) he can nap anywhere and in a matter of minutes.

The winters at Wilfong Lodge (Camp Bluff Lake, California) with Sports Chalet Tours with him standing on the front of my cross-country skis. Our first trip to go fishing in Vancouver. Watching him at age 11, catch his first halibut which is essentially like catching a piece of plywood from 300 feet below the water surface.

And it is his grace and generosity that always motivates me the most. He gave a kid in first grade his $10 that Alec got for his birthday because the kid had never gotten money for his birthday. Helping an older woman in line at the grocery store to lift things from her cart and then help her take it all out to her car. He drives one of his roommates to and from work on a regular basis because they do not drive themselves.

These and hundreds of other moments like this are an inspiration. Alec helps and supports.

My lesson from my oldest son is that of helping others without consideration to self.

I see him do these things and while some may consider his impulsiveness a sign of not thinking things through. It is that in itself that I want to know how to do more in my life. Throw caution to the wind and serve others. That is a spirit that I learn and grow from having a son along my journey in these United States.

Shmoo (L 2004 and R 2021) (Fifty Nifty Years in the United States Series) I have said and maintain that Brian makes me laugh every day. Ev... 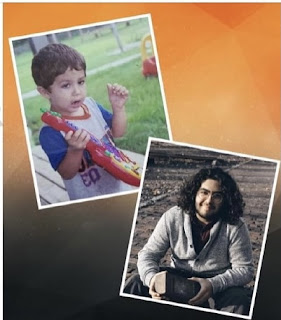