I have often thought that the term “holding hands and signing Kumbaya” was completely misunderstood. I have heard many speakers and leaders use the term in less than positive ways. There was even a Slate article back in 2012 around election time that suggested that it had gone from a “sincere protest song to drippy punch line.”

Imagine a suburban neighborhood 2 bedroom house with a backyard pool. That was our YMCA in Temple City. When I worked in our Day Camp program, we always started the day with announcements and songs. Tony Del Negro was our Day Camp leader and in the morning gathering, he would often make a great attempt to lead the singing for Kumbaya.

“Big Tony” as we called him (because there was a “little Tony” who worked there as well) would stammer through the lines often making up lyrics to demonstrate how the day was going. For example, if a child had been crying, he would emphasize the lyric, “Someone’s crying my Lord, Kumbaya.” Or perhaps a couple of campers had a fight and Big Tony would add that lyric. One time, one of the campers broke a window and Tony decided to commemorate it in song. “Someone broke a window my Lord, Kumbaya.” Of course, we would all repeat the lyric and sing on. In addition, of course, he would croon with “Al will fix the window my Lord, Kumbaya.” It was both And we would repeat. It was often heartfelt and sometimes it bordered on blasphemy.

It was not until years later, when I was introduced to the Story of Kumbaya. The meaning, I learned, was from an origin story about South Africans and their labor in coal mines in the 1800s. How the mixed lyrics that eventually ended in the Gullah folklore of the United States and part of the Creole language. (The US Library of Congress shows the song originating around 1926 with the reference in recordings. Perhaps the most famous version sung by Joan Baez.)

Despite Big Tony’s “Kumbaya,” and the several different versions, I have always heard in nearly 40 years of camping with the YMCA, Scouts, Boys and Girls Clubs as well as 4H had several similar components. Someone was always “crying, praying, singing,” and “laughing.” And in most versions, someone always called upon God, to “Come by hear.”

At the end of the day, it was all about bringing our community together. Like any community, that day camp had conflict and collaboration. We circled up in one big community, we held hands, and we sang.

I can only hope that our leaders in church, community groups, local, regional, national, and international governments all end their day by holding hands and singing Kumbaya. It is just another lesson from the camp world. It is a love letter to genuine skills that we should all apply in our lives.

1. He was relational: David's personable and approachable manner enticed hundreds of misfit volunteers to serve him. David accepted anyone.
2. He was resourceful: David made use of every situation and got the best out of it-even in the wilderness. He resourced his team to become all it could be and enabled it to succeed.
3. He was rewarding David quickly shared both rewards and recognition for victory. He affirmed his men and motivated them with words of encouragement and spoils from battle.
4. He was respectable: David modeled a leadership style that others wanted to imitate. Friends and foes alike respected him; people saw in David an example of good leadership.

I believe that David would have embraced Kumbaya. I think of Tony in the same way. One of those early influences (and a lifelong friend) that planted a seed of Kumbaya moments.

The joke goes, that camp folks like to sit around a campfire and hold hands and sing Kumbaya. A fundamental part of delegitimizing the things is really of no consequence. I am here to tell you that that could not be the furthest thing from the truth.

Tony planted a seed in my thought process that would germinate. At the end of every day, no matter who you work with and the conflict or fellowship you encounter, we all want to gather in that unity. Making friends and allies like David and bringing them into our confidence.

I have had my critics and my allies, and I have made every attempt to make sure that I treat both in a kind manner. I want to hold hands and sing Kumbaya with all of them regardless of their opinion.

Matt' Copperhead" Sheah Several times I have tried to update Wikipedia – I have submitted Matt’s name and profile to go with the ... 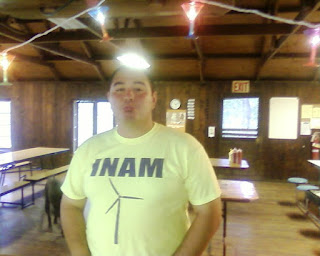